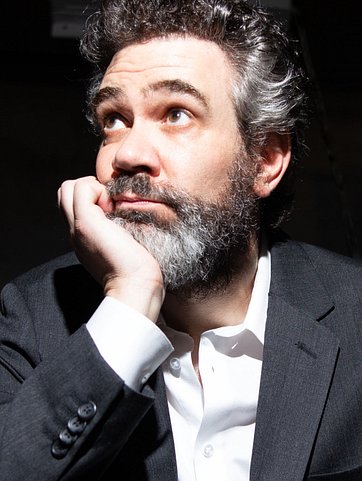 WHO IS THIS 'KEVIN DEL AGUILA?'

WHERE DOES KEVIN HAIL FROM?

Kevin originally hailed from Bakersfield, California, but didn't hail there for long. He was soon off to Albuquerque, New Mexico and hailed from there until he was about nine. He subsequently did the rest of his hailing from a little town called Lancaster in Southern California. He now hails from New York City, but there's never a cab around when you need one.

WHERE DID HE GET SUCH A WEIRD LAST NAME?

From his father, who brought it with him to the United States all the way from Peru.

WHAT DOES 'DEL AGUILA' MEAN?

'Del Aguila' is a Spanish phrase meaning "of the eagle." Therefore, Kevin is not just any ordinary Kevin. He is "Kevin of the Eagle." Kindly treat him so.

HOW DOES ONE PRONOUNCE 'DEL AGUILA?'

Kevin has had his last name savagely mispronounced for decades. To correctly pronounce "Del Aguila," one must have a facility with the Spanish language. If you have such a facility, your pronunciation should sound something like this:

Beautiful, eh? However, most people Kevin meets do not have such a facility and have learned to prounounce his name with a more Anglican bent to it:

Kevin doesn't mind this, and, in fact, usually introduces himself to others using this pronunciation, since it seems to be the closest that many can come without taking a class.

IS KEVIN HALF BRITISH?

Holy crap. Yes. How did you know? His mother was born in Liverpool. She saw The Beatles before they were bigger than Jesus.

WHAT ARE SOME OF KEVIN'S DISLIKES?

Credit card companies, the term, 'my bad,' and flan.

No. Kevin is married to a beautiful and talented actress, who, despite his warnings, went ahead and took his last name anyway. They have a son named Felix who plays the timpani and is profoundly wonderful.

HOW DO I LICENSE ONE OF KEVIN'S SHOWS?