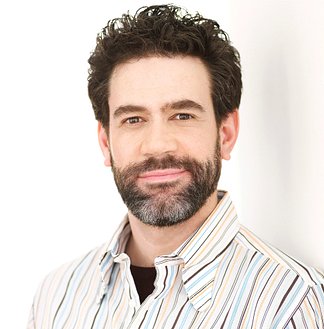 He is a multi Emmy Award-winning writer of the PBS show PEG + CAT, lyricist of songs featured in the Disney animated movie STRANGE WORLD, and book-writer of the hit comedy ALTAR BOYZ (NY Outer Critics Circle Award, Lucille Lortel and Drama Desk noms) which made history as one of the longest running off-Broadway musicals of all time.

Broadway audiences will recognize him from the original casts of SOME LIKE IT HOT (as Osgood), FROZEN (as Wandering Oaken), and PETER AND THE STARCATCHER (as Smee), and children everywhere have heard his voice as a troll in Disney's blockbuster film FROZEN. He's appeared in LOVE'S LABOUR'S LOST at The Public Theater's Shakespeare in the Park, GOD BLESS YOU MR. ROSEWATER for City Center Encores, and in the off-Broadway revival of JACQUES BREL. Television guest appearances include LAW & ORDER: SVU, Hulu's DEADBEAT, and PEG + CAT.

Other writing works include his middle-aged superhero musical THE ASTONISHING RETURN OF THE PROTAGONISTS! (2013 NAMT Festival), stage adaptations of the DreamWorks film MADAGASCAR, the wildly popular book series DIARY OF A WIMPY KID and DOG MAN: THE MUSICAL.

Kevin has written for the HBO comedy special SKETCH PAD and for numerous children's television shows, including WAFFLES + MOCHI'S RESTAURANT for Netflix and the Obamas' Higher Ground Productions, and as Head Writer of BLUE'S CLUES & YOU for Nick Jr. and the CLIFFORD THE BIG RED DOG reboot for Amazon and PBS Kids (GLAAD Media Award Nomination).

Kevin is the recipient of the Heideman Award for his play THE GREEKEST OF TRAGEDIES (Actors Theatre of Louisville) and has earned several Lortel and Drama Desk Award nominations for his work on the off-Broadway productions of SKIPPYJON JONES, CLICK CLACK MOO, and WE THE PEOPLE.

He has directed several productions of his own plays, including his comedy

6 STORY BUILDING (Best of NY Fringe Fest), NUMBER ONE: A POLLOCK PAINTING, and his adaptations of THE VELVETEEN RABBIT and SKIPPYJON JONES: SNOW WHAT. He directed the world premieres of FUNKED UP FAIRY TALES and SEE ROCK CITY at Barrington Stage, and has written and directed several events for the New York Philharmonic, including their famed YOUNG PEOPLE'S CONCERTS at Lincoln Center.